As is expected with every season, the eviction show which started around 7:00 pm took an unusual twist.

Without much waste of time, the show host, Ebuka announced the four housemates who polled the least votes; Lilo, Eric, Ka3na and Praise and asked them to stand up, after which Big Brother asked the remaining ‘safe’ housemates to select two persons whom they would love to evict from the show.

One after the other, they were called into the Diary Room, where they each disclosed the names of the two housemates of their choice to be evicted.

The housemates hug Lilo after Ebuka announces her as the 2nd evicted housemates on August 2, 2020.

Shortly after, Ebuka announced the first evicted housemate to be Ka3na, followed by Lilo.

READ ME  #BBNaija: Talking To Erica Is Worth More Than N3m – Laycon Bares His Heart 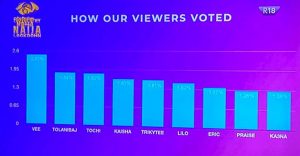 When asked on the stage how she felt about her eviction, Ka3na said: “I’m having mixed feelings but I’m glad that I made it this far.”

According to her, the main purpose of being on the show was to sell her name and she could only be grateful for the opportunity.

On the other hand, Lilo, who thrilled viewers with her ‘sooner than expected’ relationship with fellow housemate, Eric, said she was also surprised that she had been evicted but when asked what she felt was the reason behind her eviction, she said she had no idea, as she was only being herself throughout her time on the show.

Going forward, she said she would focus more on her business and she would also be going for a Master’s degree.

Of the 18 remaining housemates, Lucy who won the Head of House (HoH) position and her deputy, Prince, were immune to nominations and subsequent evictions.

READ ME  #BBNaija: ''Shut up your mouth" Ozo clashes with Prince during their drama practice (video)