They said she was defiled at school and she named her female teacher as her abuser.

The victim’s father, Mr Hanson Ifiok, said he had gone to pick her up from Kings and Queens Montessori School, Ewet Housing Estate, Uyo, on Friday, Feb 26, 2021, but she seemed distressed and didn’t notice his presence until other pupils called her attention to him.

READ ME  Davido sends a message to Yomi Fabiyi after the actor sympathised with alleged child molester, Baba Ijesha

Her father took her to her grandma’s house where he tried to bathe her but she wouldn’t allow anyone touch her.

They eventually succeeded in bathing her and when her mother asked what was wrong, the child reportedly said her teacher, Ms Onyinye Nicolas, had inserted her hand in her “bum bum”.

The parents of the victim took her from her grandma’s home back to their home that night and she repeated the same thing, that her teacher had touched her private part.

The girl’s mother then sent a WhatsApp message to the child’s teacher, asking what had happened to her daughter, but the teacher said nothing happened, asides the fact she had a runny nose.

Suspecting their child had been sexually assaulted, the parents took her to the University of Uyo Teaching Hospital (UUTH) where a pediatrician confirmed on Feb 27 that she had bruises and a tear in her private part and asked them to return on Monday to see a gynaecologist.

When questioned again, the child called the name of her teacher, Ms Onyinye Nicolas.

The child’s father said he then asked his mother to call the owner of the school, Ekaette Ebong Okon, to inform her of what had happened to his daughter at school since it was a weekend and they couldn’t report physically at the school till the following Monday.

On Monday, March 1, 2021, the family of the child filed an official report at the school.

The school asked the family of the victim for a medical report and they returned to UUTH where they met the gynaecologist. However, the child cried and fought as they tried to examine her, an act the gynaecologist said was due to trauma.

Later that day, the child was taken to the gynaecologist’s private clinic alongside a nurse from the child’s school as the headmistress of the school insisted a representative of the school had to be there.

It took the help of adults to pin the child down before she could be examined.

After the examination, the father of the child told LIB that the doctor confirmed the child had been defiled and asked if they were sure it wasn’t done by a man as the wounds on her private part looks like it was inflicted by a man. 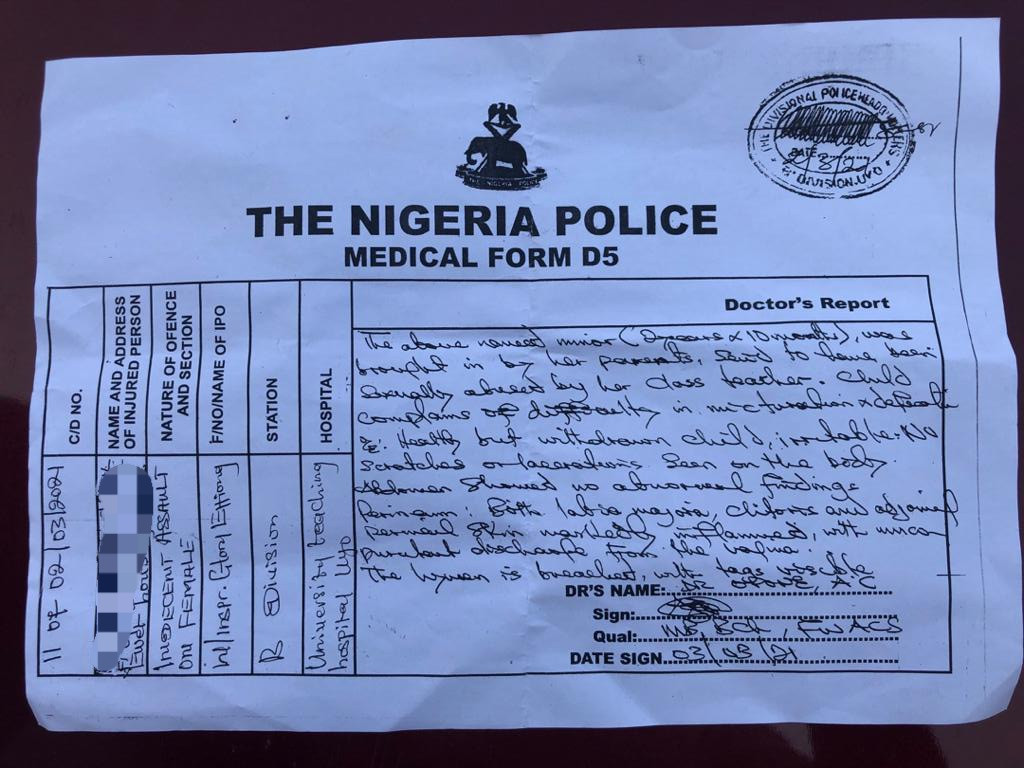 Samples from the girl and pictures were also taken for further tests and evidence.

The gynaecologist then prescribed antibiotics for the child.

On Tuesday, March 2, the family of the child reported the case to the police and investigation began.

Despite calling the proprietress of the school as soon as they discovered their daughter had been defiled and she was pointing at a teacher, the father of the child said the proprietress didn’t call them until Wednesday, March 3.

The father of the child went to meet the proprietress at the school on the same day where he found her with two of her sons.

The father said that the proprietress asked him what he wanted but he said he didn’t want anything except justice for his daughter.

“She then replied, ‘well there is nothing I can do since the case is now with the police’,” the father of the child told LIB.

The police invited the suspect Ms Onyinye Nicolas and she arrived at the police station B division with the school director and a policeman accompanying her on March 3.

The teacher was back at school the following day.

The case was then moved to the Family Unit, State Police Command, where another test was carried out on the child.

At the Family Unit, the family of the victim said they met with the Deputy Commisoner of Police in-charge of State CID, Susan Horsefall, and some other police officers, including a certain Ernest Eze who happens to be the suspect’s in-law.

On March 5, the lab result of the test done at the private clinic showed the victim had contacted staphylococcus aureus.

The father of the victim took the lab result to the police station and they collected the result from him.

On March 9, the father of the victim said he went to Emmanuel Hospital, Eket, for another medical examination and the doctor also prescribed antibiotics for his daughter.

By March 11, the father of the victim said the police invited him to come to the station with his father, his brother, and their maid.

When all four of them went to the Deputy Commisoner’s office along with the suspect and a representative of the school, they met Ernest Eze who introduced himself as an in-law to the suspect.

The father of the victim said Ernest Eze then told them they do not have proof or bloodstains.

The father said Mr Eze told them that when the Deputy Commisoner asked the victim what had happened, she said her teacher had only “cleaned her bum bum”.

The father of the suspect said the police then asked him and his brother to go to the police clinic for a lab test.

At this point, as the father of the victim and his brother were now being viewed as likely suspects too, the father got a lawyer on March 15. The lawyer advised him to write a petition.

On the same day, the father of the victim said he found out that the police went to his house to arrest him but he wasn’t home so they left.

On March 16, following his lawyer’s advice, the father of the victim submitted the petition he drafted to the Human Rights Commission, Commissioner of Police, Attorney General of Akwa Ibom, Commissioner of Eomen Affairs, FEYREP and International Federation of Female Lawyers (FIDA).

When he got home from submitting the petition, he said rumor was already flying around that he had been arrested and confessed to raping his own daughter.

The father of the victim said he was then told that the case has been transferred to X squad.

He said he was informed of this on March 24 and was asked to bring his wife and daughter to the police station. When he arrived at the station, the father said they were told the case has been transferred to Zone 6 and he was asked to enter the car immediately with his family.

He said he was not informed earlier but the suspect had been informed and she arrived ready with a travelling bag.

The father said he became suspicious and called his lawyer who then advised him to go with the police.

The father expressed his dissatisfaction with how the case is going. He asked that a proper investigation be carried out and his daughter’s abuser be fished out.