Businessman allegedly framed-up, arrested and tortured after catching senior police officer in bed with his wife

A Chief Superintendent of Police serving with the Akwa Ibom State Police Command, Mr Celestine Umeh, allegedly arrested, detained and framed-up a businessman, Mr Clement Asuquo Etim, and two others on trumped-up charges after he was caught in bed with the wife of Mr Etim in Uyo.

According to Sahara Reporters, CSP Umeh (pictured above) had been having an affair with Mrs Lawrentia Asuquo, Etim’s wife for a long time before he was finally caught at about 7:00pm on April 27, 2020 at their home at Aba Ukpo Estate, which is not too far from where the Akwa Ibom State Police Command in Uyo is located.

Etim told Sahara Reporters that the senior police officer had been having a sexual affair with his wife for a long time and that he has been hoping for a day that he will catch them red handed.

Etim told the publication, “Whenever I travel to Calabar where I do my business, I usually receive reports that my wife invites her lover, CSP Umeh, to our matrimonial home to spend the night.

“They were having sexual affair in my house not minding the presence of my home help, a boy of 15 years old.”

According to Etim, luck however, ran out on the police officer and his wife when he got a tip off that CSP Umeh was in his house again to spend the night on April 27.

Following that information, Etim decided to return to Uyo immediately.

He said, “On getting home in the evening last Monday, I caught the CSP with my wife enjoying themselves on the matrimonial bed.”

Etim said he was provoked on seeing CSP Umeh in bed with his wife and decided to confront him along with his cousin that came with him from Calabar as a witness.

Following the confrontation, the policeman ran out of Etim’s house with his wife and abandoned his SUV.

They were taken to the Akwa Ibom State Police Command.

On getting to the police command, Etim said that the police tortured him and falsely accused him, his cousin and house help of “assaulting” CSP Umeh and “stealing his mobile phones”.

Etim was detained illegally from April 27 to 30th when he was temporarily released to go and search for the keys of the SUV belonging to CSP Umeh which was abandoned at his house.

However, the cousin and house help were detained in police custody from April 27 April to May 4 when they were arraigned before a Chief Magistrate Court in Uyo on trumped-up charges of assault and stealing.

Etim told the publication that when he was released, he decided to go to the hospital for medical checks as blood kept coming out from one side of his ear as a result of torture by the Officer-in-Charge of General Investigation, a Superintendent of Police named Ekene Nwosu, and other policemen at the Akwa Ibom State Police Command.

He said that SP Ekene used a plank to hit his ear and also assaulted his house help and kept shouting at them for fighting with Umeh.

Surprisingly, on getting to his house after he was released, Etim met his three bedroom flat apartment empty.

He said his neighbours and estate management told him that his wife came with strangers and moved out all his properties and household items and relocated to an unknown location.

“When she was confronted by people in the estate, a certain SP Ekene instructed the estate management to allow my wife leave the estate with all my properties or face the consequences,” he said.

According to the charge sheet obtained by Sahara Reporters, the three men were accused of hitting the police officer with a bottle.

Count two, three and four of the charges reads, “That you Clement Asuquo Etim, Patrick Okon Edet, and Christopher Bassey Effiong on the 27th day of April, 2020 at Aba-ukpo Estate, in the Uyo Magisterial District, unlawfully assaulted one Celestine Umeh, a Chief Superintendent of Police, by giving him fist blows all over his body and thereby committed an offence punishable under Section 360 Of the Criminal Code, Cap.38, Vol, 2, Laws of Akwa Ibom State of Nigeria 2000. 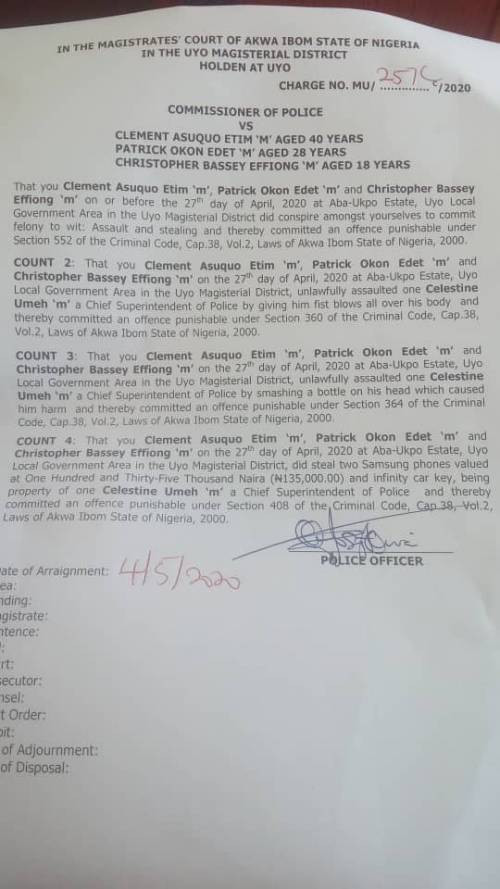 “That you Clement Asuquo Etim, Patrick Okon Edet, and Christopher Bassey Effiong, on the 27th day of April, 2020 at Aba-ukpo Estate, in the Uyo Magisterial District, unlawfully assaulted one Celestine Umeh, a Chief Superintendent of Police, by smashing a bottle on his head which caused him harm. Thereby committed an offence punishable under Section 364 of the Criminal Code, Cap.38. Vol.2, of Akwa Ibom State of Nigeria, 2000.

“That you Clement Asuquo Etim, Patrick Okon Edet, and Christopher Bassey Effiong on the 27th day of April, 2020 at Aba-ukpo Estate, in the Uyo Magisterial District, did steal Samsung phones valued at N135,000 and infinity car key being property of one Celestine Umeh, a Chief Superintendent of Police, and thereby committing an offence punishable under Section 408 of the Criminal Code.”

READ ME  Third victim of Lagos helicopter crash has died

Human rights lawyer, Inibehe Effiong, whose law firm is representing Etim, his cousin and home help, told the publication that the conduct of CSP Umeh, SP Ekene and other police officers at the Akwa Ibom State Command involved in the case was reprehensible and deserves immediate disciplinary action from the Inspector-General of Police and Commissioner of Police in Akwa Ibom State.

He said, “I am alarmed by what these police officers have done to this man, his cousin and home help. It is reprehensible, unprofessional and damaging to the image of the Nigeria Police Force. This is one of the most repulsive cases of abuse of the police institution. Where lies the hope for Nigeria if this kind of atrocious and scandalous action is allowed to go unpunished?

“It is more troubling that the police resorted to filing a criminal charge against them in their desperation to cover-up their illegal and abominable conduct. We cannot allow this to go unpunished.”

The Akwa Ibom Police Public Relations Officer, CSP Nnudam Fredrick, when contacted, claimed not to be aware of the matter but promised to confirm if the state had such matter.